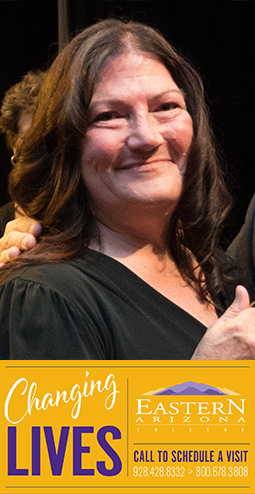 “I’ve been wanting to go to school for nursing since I was 17,” said Eastern Arizona College graduate Patricia Nelson, of Fort Thomas, Arizona. Her wish took longer to achieve than planned, but she made it come true at last.

Nelson made several tries at a nursing education through the years, each one falling through. “Every time I started the nursing program somewhere, something happened in my life and someone said ‘You can’t do this right now,’” said Nelson. That included a 2006 attempt at EAC, when Nelson and her husband owned a local business. As Nelson recalled, her college try ended when he said she was needed at the business.

Nelson said their marriage ultimately ended, leaving her not only free to go back to school but also needing the education to support herself. And this time Nelson, 56, made it happen, graduating with the EAC nursing class of December 2018.

“Completing the program has changed my life immensely. I learned not only how to be a good nurse, I learned some life skills being in the program. I learned how to take on challenges, focus on priorities and make better choices. I’m able to pretty much support myself,” said Nelson, now employed at Cobre Valley Regional Medical Center in Globe, Arizona.

Nelson’s challenges at EAC included supporting herself without working - it proved difficult to hold a job while concentrating on the nursing program – and relating to much younger students. “When you’re old enough to be the other students’ mother, you don’t have that same camaraderie,” she said. “You’re kind of on the outside.”

Nelson said she enjoyed EAC’s “smaller environment,” which provided more interaction with instructors. “I thought that would be very advantageous for an older student,” she said. “It’s a more fine-tuned type of learning, and I think it’s priceless. I can’t even imagine trying to do this at a bigger campus.”
One of Nelson’s favorite memories was the traditional nursing pinning ceremony. “That was wonderful. Everything is a reality now; you’ve achieved what you needed to achieve. It was pretty exciting, and a lot more emotional than I thought it would be,” she said.

“My big advice for young ladies today is to get an education, to get training, to do something. Even if they think they may never use it, it’s good to have it to fall back on,” Nelson said.